In this blog we will look at some of the CLI commands you can now run to gain efficiencies when deploying or operating a Cisco Wireless Infrastructure using AireOS.

I just deployed AP(s) in a small remodeled two story office area within a hospital. There are a lot of deployment tasks left. First lets look at what RRM has assigned the power and channel to the AP(s).

But how do I do that when there are 209 AP(s) on the WLC? One at a time? Yuck. Or all at once? Double Yuck! But since we use a consistent naming convention, we can run a CLI command to limit the output.

So we see that the deployment hasn’t been optimized. Lets do that now…using UltraEdit.

Here is the config I will be deploying and also the verification. I am just adjusting the channels in 802.11b for right now. 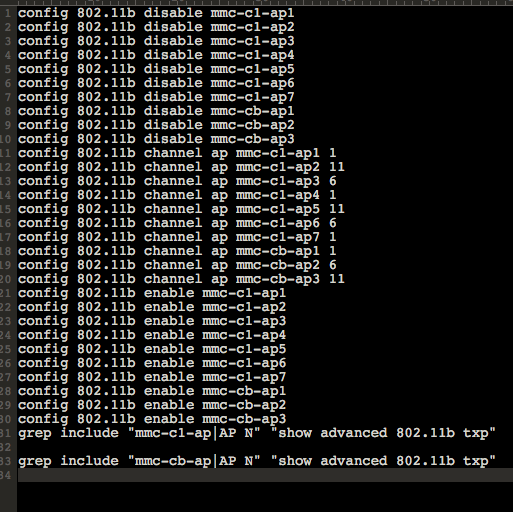 Here is the output of the script:

You can see the channels are now set and verified at a fraction of the time it would take to do that task in the GUI especially if each AP was named something confusing.

Ok..so I am going to do the same process with the 802.11a radios and get coffee….Be back soon…

So now I have the channels set…should I adjust RRM so it doesn’t do something stoooopid? Yes….I will create the AP Group and RF Profiles and then run verification scripts in CLI.

The RF Profile limits RRM to 2dBm – 5dBm in 2.4GHz and 8dBm to 11dBm in 5GHz. It looks like the RRM Algorithm still has to update a couple radios.

One of my favorite scripts to run is to check AP Uptime and Association to WLC Time.

That is it for now. I gotta do work on some sites. Hopefully, I have demonstrated the usefulness of a simple, consistent naming convention for AP(s), WLCs, AP Groups, and RF Profiles, WLANs, and Interfaces. It really will help you and help the next wireless engineer once you get that C-Level gig! 🙂